Sorry for not blogging more often.

Unfortunately the blog has been a little bit neglected over the past few months. I’ve sat down to write a blog many times, but never quite known what to write about. Lots has happened. Lots of stuff that deserve a blog of their own, but here I am lumping 101 blogs into 1.

Sport can be a frustrating things at times. This past season was full of frustration. Things never quite got off the ground and came together at the right time. When I started racing after Christmas I had a few quite surprising results, a semifinal in the sprint at the tour de ski and again at the Scandinavian cup in Lahti. Being brutally honest, I was not in good enough form to get those results. But things came together, I had fantastic skis, I lucked out with who was in my heats, and I skied very well tactically.

After those two races I actually started to feel pretty good. My shape was better, I was skiing well and all my training had been going as I had planned. The world cups in Toblach and Falun were both disappointing as I failed to advance beyond the heats, being out lunged to the line in Falun. Norwegian nationals followed a similar story. I was feeling great, but we messed up the skis in the prologue and then I ended up getting drawn in a heat that may as well have been an Olympic final and got edged out for 4th and 3rd «lucky looser» so failed to advance from the heat.

By the time the Otepaa world cup came around I was desperate to get to at least a semi final. I managed that and felt pretty good. My form was showing signs of really improving and things were starting to come together. After the 12th place in Otepaa I was feeling pretty good. The week between world champs and Otepaa went well and I was in the best form I’d been in all season. In fact the 3 weeks after Otepaa were pretty amazing. I was in fantastic form. My training felt easy. My technique started to come together and I started to feel really strong out skiing. In that 3 week window I had 1 bad day. It just so happened that it coincided with the same day the world championships sprint was scheduled.

The world cup finals this year were moved to Quebec. I’d been eyeing out the races there as somewhere I could finally show something for my good form. Armed with a new jet lag prevention plan from the physiologists at the Scottish institute of sport, I set off to Canada with high hopes and dark sunglasses on at 6 in the morning. The sunglasses must have helped. I smashed out my 2 best races of the season, or at least the 2 races I’m most pleased with, and scored my first ever world cup points in a distance race. After Quebec things took a sort of more relaxed end of season feel. The jet lag prevention was taken nowhere nearly as seriously on the way back as the way out. And in all honesty I was mostly looking forward to getting home and tucking into the litre of maple syrup I’d bought at duty free.

However there was still 2 weeks left of racing. First up was Haukelirennet in west Telemark. A 32k mass start race through the mountains with a sprint prize after 8k and a prize for the fastest downhill split for the last kilometre – down a downhill slope. The first thing to negotiate was the 7 hour drive. I ended up driving with Torgeir and Ånund Byggland. Whilst long, it was quite possibly one of the most banterous drives I’ve been on. With Torgeir and Ånund working as a comedy duo time past pretty quick. I got back from Canada on the Tuesday and the race was on the Saturday. I was still feeling pretty jet lagged and generally like a bus had run me over. When the race got cut from 32 to 18km because of high winds on the mountain I was pretty pleased. When the start went and the pace was fairly pedestrian I was even more pleased. I ended up second at the sprint prize I then proceeded to get dropped by the leaders before catching them up on the final downhill. I sprinted into second behind Sjur Røthe, a pleasing and rather surprising result considering how I was feeling.

The final weekend of racing of the season was Norwegian Nationals at Gålå. I produced another good distance race with 13th in the skate 10k. The classic 50k was a battle. I’m not sure I have words to describe a 50k individual start, but I’ll try. It was warm with the temperature well above freezing and the sun beating down on the track. The reflection of the sun off the snow means there is no escaping the heat. It feels like you’re in an oven and your sweat is acting like hot oil. You start on your own and ski 5 loops of 10k. Mostly on your own. You dont speak to anyone apart from to ask desperately for food or drink from a coach at the side. After 5k you start to think this is ok, only 45k left, I’m getting into a good rhythm. After 10k you think you are getting the hang of it. And after 20k you are done. Have no energy and are literally begging coaches to give you some food. The last 30k feels miserable. Everyone is passing you and it feels like even an old granny would ski faster than you. You still have over an hour and half left to race. You have no energy and your body is telling you to stop. Yet you keep pushing. Everyone out on the course is feeling the same. And somewhere I knew that, but at the time it felt like I was the only one suffering that much. I got to the finish and somehow in a state of delirium waddled my way back to the wax cabin. I spent the next 30min lying on the floor eating anything I could get my hands on and trying to recover. I don’t think I’ve ever been so exhausted in my life.

A 50k is a fitting way to end the ski season. Brutally exhausted and like the sheer thought of going another metre on a set of skis would cause you to commit suicide. Fortunately with in a couple of days the exhaustion and the feeling starts to rescind. Although I didn’t do any racing I still got out skiing In April. The odd training session here and there and I even went to the gym a couple of times. Just before Easter Annika and my self got a short break in London. We spent the time mostly «shopping», although we only actually bought something in 1 shop. Apparently I’ve been shopping the wrong way all these years…

The last weekend in April I headed to Mosjøen to take part in Bysprinten for the second year in a row. All I can say is WOW, what a show they put on! Mosjøen knows how to do it. The ski race is quite possibly the least important thing of the weekend. Handing out medals to all the kids from the kids race, signing autographs, speaking to the sponsors, Aquavit tasting at the local Aquavit bar, going back country skiing, eating shrimps… all so much more important stuff to do than actually racing. And apparently I’ve signed my self up to go on a 2 day boat trip on a viking style boat with he owner of the Aquavit bar.

The new training season is now underway. There is still good skiing at Sjusjøen and I’m making the most of it by heading out skiing most mornings. I’ve been trying to delay rollerskiing as long as possible, the first rollerski session might come next week though, as the snow is starting to melt. This year the British Team programme is looking very exciting and I can’t wait to get stuck into training and working on the areas I need to improve – blog writing is high on the list of priorities to work on. 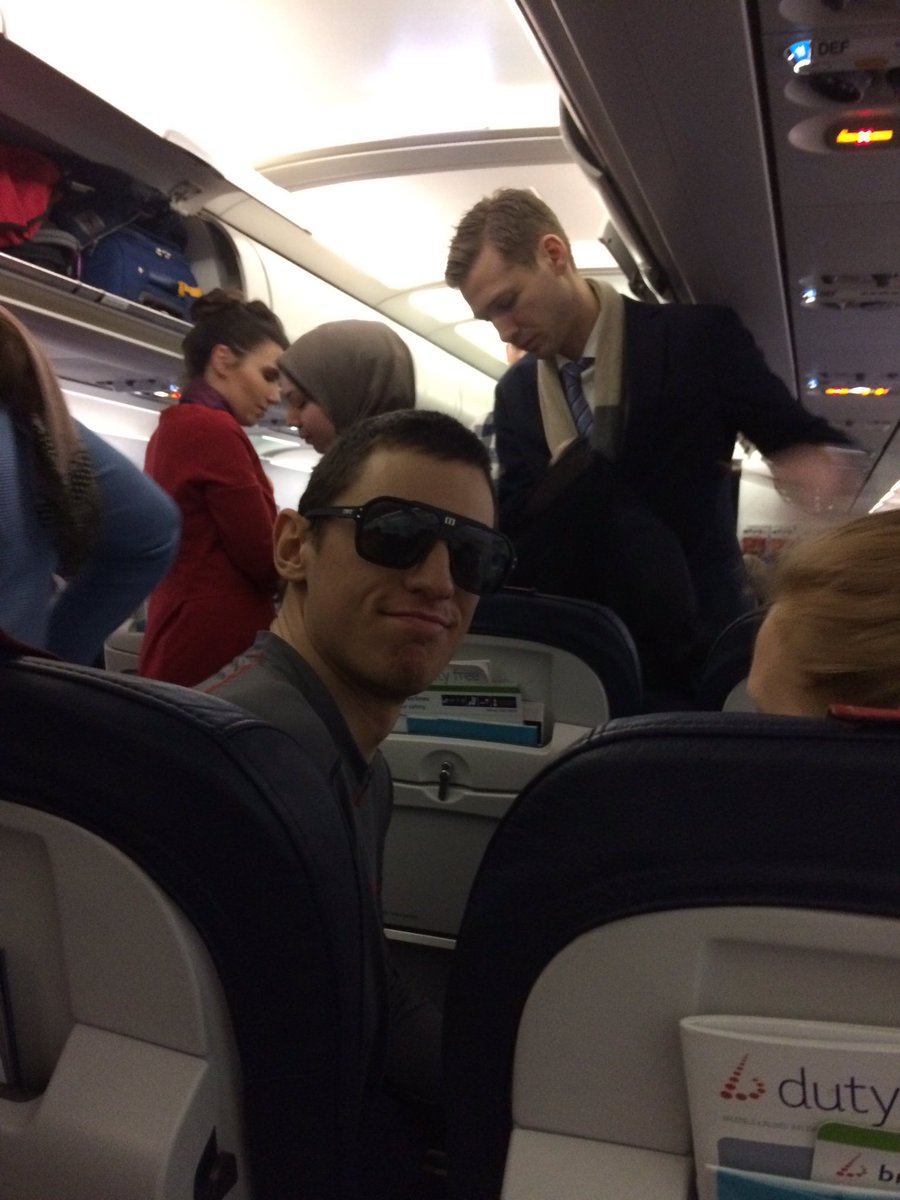 Proof that I did actually wear dark sunglasses on the plane to Canada. Supposedly it can help with jet lag.